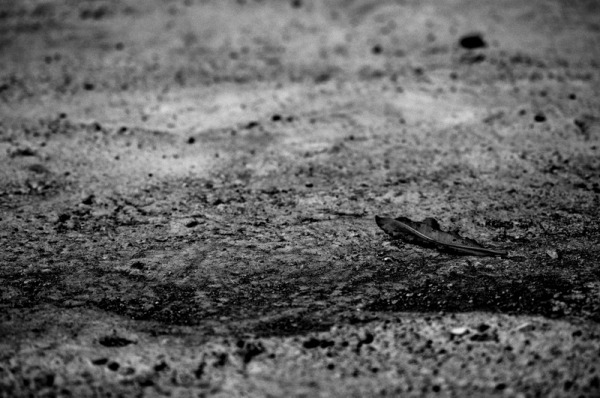 A man, utterly alone, wandered to the very outskirts of town. He sat down on a bench along a broad working-class boulevard. Trees lined the street and a falling leaf came to rest upon him. For nothing in this world would he have dared throw this leaf away: it was a sign from above, so he clung to it.

He needed to return home, where something to eat was waiting for him; he wasn’t hungry, but he required nourishment; or would it be better to no longer delay the inevitable, not bother moving, and eventually just die there? But he then found himself in a most unusual quandary. A man walking down the street with a leaf in his hand would undoubtedly attract attention; however, he didn’t have the right to separate himself from the leaf, for it was a sign from above. So, in an effort to avoid ridicule, he twirled the leaf in his hands which he crossed behind his back, as if out of distraction. However, after twirling it and twirling it, in the last little street before arriving home, the leaf suddenly escaped his grasp. Overcome by cowardice the man continued on his way, and the leaf was left lying on the ground, behind him.

The leaf, still lying there, grew more distant with each step. He felt his cowardice grow. He imagined vast expanses growing at nightfall, the thought of the leaf appearing and disappearing, without respite. At a certain point, fear finally got the better of him, and in spite of everything he turned around, mechanically, and went in search of the leaf.

In this debate upon which his happiness, if not his very life, depended, he had nonetheless succeeded in making up his own mind. That is why, upon deciding to retrace his steps, he set off in search of the leaf with a somewhat lighthearted air, and no longer afraid of what anyone else might think.

A little leaf, slightly withered, difficult to discern among the cobblestones.

He walked quite far without finding it. He wondered whether the wind had carried it off, or the steps of a passerby. A great sadness swept over him. Then the song of a distant joy swelled anew, because such misfortune was no longer his doing. So, with a fresh spring in his step, he headed home.

He was barely halfway when he noticed the leaf, lying there, on the cobblestones, clearly visible and utterly banal. Being small, and blending with the cobblestones as it did, the man understood how he could have missed it. Full of joy, he picked it up, unconcerned by the stares of the women, who were watching from their windows while hanging their laundry.

Victory was now his, in broad daylight, for all to see. So leaf in hand, head held high, he strode home.