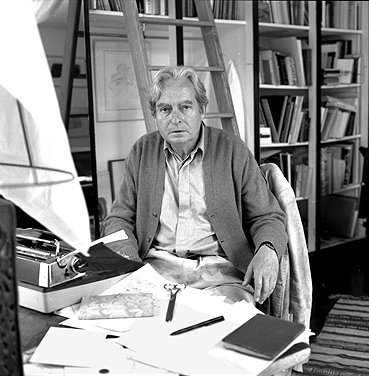 Criticism invariably denotes a power (… thus “infallibility in poetic creation”), whereas poetry often implies impotence. Critical discernment is a discernment of prey. Another insight: “so sehr einfaltig…dass man wirklich oft fürchtet, die zu beschreiben [Obviously … one often fears it when one must describe it].” The critic rarely experiences this fear.

Such is this strange poetic lucidity that firmly establishes, without any confusion, that it is a question of an image, but–it must be added–of an indescribable image: it distinguishes, insulates, only in order to confuse, highlights only to plunge back into the original silence from which it was drawn.

Thus, isolated,  this image briefly bathes in its isolation. It foretells of another fusion – marking the end of its state as image.

It is the infallibility of chance: as if this poetic labour led to a chance, etablished a chance – poetry only taking form starting from a keen sense of a failing, of a lack that is to be restored: it is limping along: this is the insight that always leads to the most threatened point, where the threat is clearest, where the clarity is one of missing walls…

The lucidity, the critical discernment that is its usual propriety, and from which it borrows its features and voice each time that it takes note of itself, always begins with restoring these walls.

This failure, this chance, can be expressed only in the guise of infallibility: this is the essential contradiction that Baudelaire has marvelously embodied between the sudden resultant lucidity as it blindly emerges in the poet , and the causal lucidity of the critic. The first phase of this contradiction must inevitably go unnoticed because, as soon as it is isolated, it assumes the features of the next phase. This first essential lucidity can in fact take form only in poetry, of which it is the sole raison d’être, but if one isolates this purpose, this aim of poetry in which the hand remains open, it immediately becomes a critical fist.

This metamorphosis occurs all more readily as  this unpredictable lucidity , this unpredictable bringing-to-light, and appears as a generality, a universal fact. But if you will, a generality that can never be generalized, that is the communication of the poem and of the universal  but which cannot be separated from the poem that bears it. It is the poem’s heaven. It is not conducive in any way whatsoever to poetry.

But our critical discernment heads straight for this end, that is how we approach the poem: by reversing the order almost mechanically.

Reading has almost nothing in common with the poem, or our discernment with its discernment.

And yet, from time to time, we stop short, like he has: “man wirklich oft fürchtet, die zu beschreiben …”

We correct only the word that is related to what is beyond us. And this infallibility in no way guarantees a poetic infallibility.

It is true that one kills the other, and yet we must constantly switch from one to the other.